Descended in the Standish and Alden families.
Loara Standish, daughter of Captain Myles Standish, is thought to have made this sampler in her teens. It is the earliest known American-made sampler and the earliest known sampler with a verse.
Samplers of the 16th to mid 18th centuries served as permanent records of stitches and designs, intended for reference, unlike later samplers that were planned for display. American samplers followed the British form, as instruction in needlework passed from mother to daughter.
Typically, Loara Standish’s sampler is long and narrow (measuring approximately 7 1/4" wide x 23 1/2" tall) with patterns arranged in horizontal bands. Stitches, worked in counted thread embroidery on very fine 50-count linen, include Montenegrin cross, long-armed cross, back, outline, eyelet, double running and arrow-head. The rose, carnation, oak leaf and an intertwined "S" are among the stylized floral motifs above the verse :

"Loara Standish is my name

Lorde guide my hart that

I may doe thy will also

My hands with such

Convenient skill as may

Conduce to virtue void of

Shame and I will give

The glory to thy name"

This band was a bit confusing because the directions called it a long Arm Cross but the diagram looks more like an upside down Montenegrin stitch. I love the Long Arm Cross stitch more than the Montenegrin so I was torn which to do it as. Following the diagram it crosses over several stitches a couple times and looked bulky to me but I think this was so the back came out ok. This was not an important point to me since I was doing the non-reversible anyway. I ended up doing a regular long arm cross and liked it the best.
Posted by Patti-Rocky Mtn Stitcher 1 comment:

Haven't posted an update for a while. I am working on it simultaneously with the Loara Standish sampler. (among other little things). 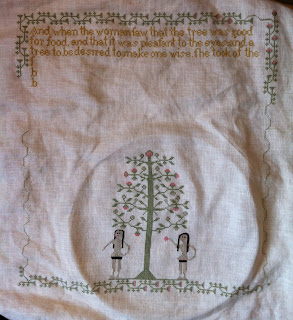 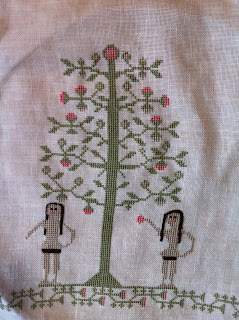 The chart says count down 6 threads but I figured that is where you begin the next stitch below. Not 6 stitches between rows at least not what I could tell from the picture. I put 3 threads between row 1 and 2.
Band Two took me a bit to get use to since its stitched "over 3". If you remember that when you come up at a vertical thread you cross down into a vertical thread and same when coming up at a horizontal thread then down a horizontal. And if stitching upward or downward in a continuous row you will do one in a vertical then the next horizontal etc. Once you get the routine down its pretty simple. The tendrils or backstitches on the chart aren't easy to tell which is what colour so I had to look at the picture. The tendrils coming off the blue crosses are blue and the BS off the tan crosses are tan. Here you can also see a close up of Band 1 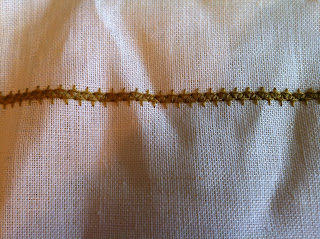 The fabric came in the kit and it 35ct so the finished sampler won't be as small as the original which was stitched over 50 ct.
Band One was pretty easy. Called the Standish stitch.
Posted by Patti-Rocky Mtn Stitcher No comments: 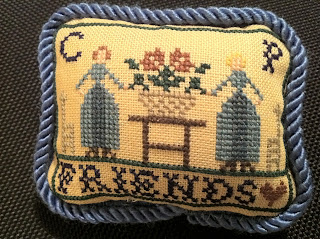 Pincushion for my best friend in Canada
Posted by Patti-Rocky Mtn Stitcher 5 comments: 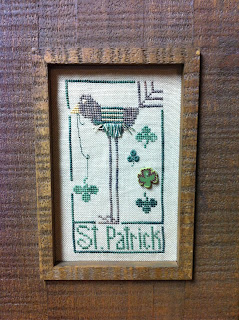 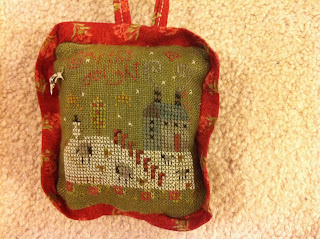 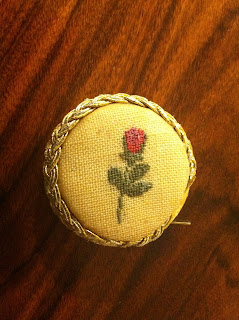 A wonderful member of the Sampler Guild of the Rockies passed away last month and in her memory a rose motif was designed in her honor. I stitched this over 1 on 40 ct Examplar linen and mounted it to the top of a tape measure.
Posted by Patti-Rocky Mtn Stitcher 3 comments:

Other Great Places to Visit